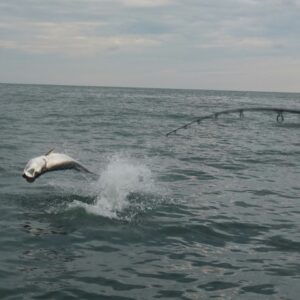 Tarpon flood the Charlotte Harbor in the early spring beginning in March and will feed heavily prior to the spawn in July. Some of my best tarpon trips are in the early tarpon season when tarpon are actively feeding in the Harbor. With the majority of the tarpon spread out and forging unlike the Boca Grande tarpon schools when you get on these fish they eat. I typically start fishing at daylight when the live pilchards are easier to catch and once I have livewell full of bait its a hunt for silver. You will find tarpon in singles, groups or a school. Once you have located these tarpon it is game on.

I made a early mark in the Charlotte Harbor tarpon fishery and spent many days by myself or with one other local guide in early season. While other fishing guides spent the day fishing for snook I stayed on the hunt for tarpon and put my clients on the tarpon as soon as they showed in the Harbor 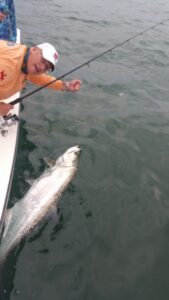 Charlotte Harbor is the second largest estuary in Florida. The Harbor sits Between The Boca Grande Pass and Punta Gorda Shorelines. The Harbor has two main rivers the Peace and Myakka Rivers that feed it from the north. Lined with mangroves, grass flats and filtration islands it will sustain a large bait population almost 12 months out of the year. The average depth is about 12ft deep but there are some distinct holes just over 20-24ft deep. These deep holes will hold tarpon, most all of the tarpon season, along with cobia mackerel and sharks. Ladyfish, bluefish, and triple tail are also available. Charlotte Harbor is assessed from most any where in Southwest Florida from Burnt Store Marina, Boca Grande, Fort Myers, Cape Coral, Punta Gorda. Charlotte Harbor fishing charters are versatile and most every species of fish this are available in the Harbor.